As the film with Steve Mc Queen is started to date, already 44 years, an American film company decided to maintain Papillon’s legend by making a new film about him.
Hollywood then took possession of the subject.

The film is produced by the company : Red Granite Pictures.
This young company was created by two friends in 2010, Riza Aziz, president, and Joey Mc Farland, vice-president.
Red Granit Pictures has already produced several films including “The Wolf of Wall Street” starring Leonardo Di Caprio, which significantly contributed to its recognition.
It seems that this new film on Papillon is the most personal project of Joey Mc Farland.

The first week of January 2013, he called me. We met a few weeks later in Paris. At that time, Red Granite Pictures was only at the very beginning of this project, thinking hard about possible approaches. However, he wanted to make a film as close as possible to H. C.’s real life, something the first film didn’t do. He considered taking inspiration from my book Papillon Libéré. After we met, they proposed me to sign in April 2014 a consultant contract for the pre-production of the film. I had to send them pictures of Henri Charrière at all ages of his life and provide them with all documents that could contribute to a better knowledge of the character, at least physically. I should have read and correct the script, that I never received.

My commitment was restricted by this sole mission.
I didn’t read the screenplay nor did I take part in the production of the film.
I don’t have any other information than those found on the Internet.
We can sum them up as follows :

The screenplayer is Aaron Guzikowski.
The producer is Mickael Noer (Danish).
The main actors are Charlie Hunnam as Papillon and Rami Malek as Dega. The actors Roland Moller and Tommy Flanagan are also playing roles but I don’t know which ones.

I was accompagnied by a journalist of FR3 – Mme Vanessa Fize – who wanted my feedback in the moment.
( You can find the video of this mini-report at the bottom )

Overall, I was very disappointed by this movie.

For some time, I understand that the production had given up the idea of making a film more authentical, based on the real life of Henri Charriere, and by developping the subject on a larger part of his life than only the penal colony.

It was Joey Mc Farland’s privileged idea when we met in Paris, in february 2013. I ignore the reasons for this change in stategy as I discovered a remake in the strict sense of the therm, a true copy-almost – of the original movie.

So, I expected a movie – defenitely based on the book Papillon – but with at least some novelties from the movie of 1973, a new film script, new film scenes, characters highlighted other than the eternal Dega, etc.
Besides the first ten minutes when we see Papillon in Paris before his trial and his transfer to the penal colony, I just discovered a pale copy of the first movie !

Because that’s the risk of doing a remake : its comparison with the original one ! The first film, considered to be a classic, even more a master piece, of course this new production not equal to the first one. The comparison can only be to the detriment of the new film. To avoid any parallel with the original one, something very different should have been done, write a different script, have some creativity, some originality, etc.
Invent another film, even based on the same book !

I was also chocked by the general environnement of the project, one suspects to be in Eastern or Southern Europe.

Even if I endeavoured to watch this movie with fresh eyes, with the right spirit, not the specialist’s one, I was totally taken aback by seeing Papillon evasions
( I had the feeling I was watching «  le Grand Bleu »)
And what about the scrubby garrigues ?
The lime stone cliffs ?
The Devil’s Island, with it’s impressive cliffs that don’t ressemble at all at the reality ?
The central builing, the tower Papillon climbed to sea the ocean, where as there were only poorest huts on that island ?
The same for the men : not a Black, not a metis ; not one person resembling for a distance or close up the convicts of penal colony !

The book Papillon yet very romanced, but its tragic history took place in French Guyane. Rather than adding so many inconsistencies to H.C.’s book, they had to stick as close as possible to the geografic, social and human reality to offer this film a semblance of credibility.

In order to end on a positive note, I salute the main actor Charlie Hunnam, who saved what could be saved…..

I also appreciated the H. C. ‘s real photograph at the end of the movie, and it’s adequate statements, the only moment that provide me some emotion.

I believe the feeling of this film is essentially a generation’s problem :
The remake can be an adventure film, correct thanks to Charlie Hunnam’s performance, for young people who don’t know Papillon’s history, who didn’t read the book, who didn’t see the film in 1973.
The those over 50, who know this epic well, especially in France, this film is nothing but a disappointment.

Such a shame nonetheless to be interested again in this man of extraordinary destiny, to try to bring him back in the spotlight, to have invested all those means, to end up with poor outcome.

Finally, I will conclude by saying, the only interest of this film is that we’re again talking about papillon, in part of the world and during several weeks.

But the real film that’s left to be done : the one about H.C. real life !
Since the Americans are unable to do nothing else than heavy caricature, I invite the French producers and directors to take on such an adventure, to play with finesse and in any dept because that’s what this figure demands, to show off their talents.
Banco ? 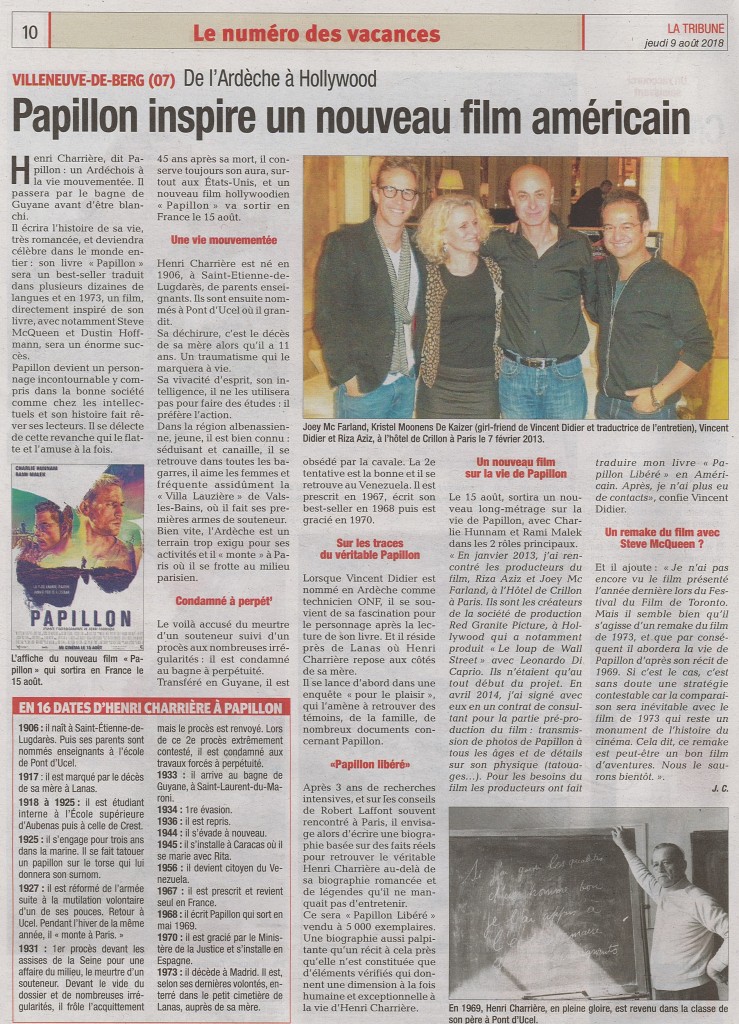